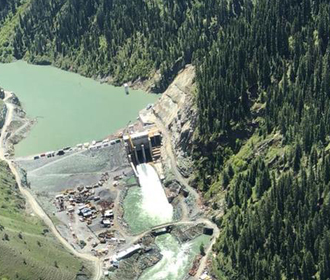 May 19, 2018: Prime Minister Narendra Modi inaugurated the strategically important Kishanganga Hydro Power project built by HCC on May 19, 2018. HCC has time and again taken up complex infrastructure projects and created benchmarks by contributing to India’s infrastructure journey. The Prime Minister terming the project as “an engineering marvel” stands testimony to this.

Commenting on the project, Mr. Arjun Dhawan, Director & Group Chief Executive Officer said, “The timely completion of this strategically important hydro power project along the LoC speaks volumes about HCC’s capabilities and scale of operations. Our team has soldiered to commission this project in the face of stiff challenges countering logistical, geological and climatic hurdles besides the odd shelling from across the LoC. This being the first major EPC project of NHPC, HCC has been involved in the whole lifecycle of the project from design through construction and commissioning. Our nine decades of experience in developing crucial infrastructure in India have equipped us with the expertise to deliver this complex project, which we are proud to have inaugurated by our Prime Minister.”

The construction of the project began in January 2009 on three fronts – Head Race Tunnel (HRT), Power House and Ventilation Tunnel. The Kishanganga project envisages diversion of water of the Kishanganga river to an underground power house through a 23 km HRT, located 1.5 Km deep into the mountain. The plant will generate 1,713 million units of power per annum. Apart from the many states which would be the project’s energy beneficiaries, 12 per cent power generated from the project shall be provided to the State of Jammu & Kashmir.

HCC team created a world record of the first successful Tunnel Boring Machine (TBM) operation in the Himalayan region and accomplished a national record by achieving “highest tunnel progress in a month” of 816 m in November 2012. While doing so, the team has successfully overcome several geological and engineering challenges.

It was critical to complete the project at the earliest in view of the dispute raised by Pakistan in the year 2010 in the Hague’s Permanent Court of Arbitration (CoA), arguing that the Kishanganga Hydro Power Project violates the Indus River Treaty. On December 20, 2013, the International Court of Arbitration gave its final award which unequivocally allowed India to proceed with construction of the Kishanganga dam in the state of Jammu & Kashmir.