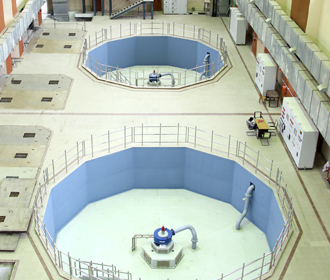 The Pare Hydro Power project is a run-of-the-river scheme on the river Dikrong, a tributary of the river Brahmaputra. The project has a capacity of 110 MW and it consists of two units of 55 MW and utilize tailrace discharge of the 405 MW Ranganadi Stage-I project. It is expected that it will generate 506.42 million units of power in a 90% dependable year.

The geographical condition of the river makes it one of the most compact hydropower projects in India. The river is in a horseshoe shape from the dam to the powerhouse which makes the Headrace tunnel one of the shortest with the length of just 2.8 km. However, the discharge of the river is quite high to the extent of maximum flood levels of 5000 cumecs. Hence the HRT has a large diameter of 7.5 M to generate enough head for power generation. The entire project from the dam to the powerhouse has been set-up within a distance of 3 km. Compactness of the size makes it one of the most economical projects in the country.

The remote location of the project, poor accessibility, and unpredictable hydrology posed numerous hurdles in the construction of the project. The lead time of the delivery of major materials like steel, cement to batching plant and site location was unpredictable due to landslides and poor road conditions resulting in vehicles halting at several locations before reaching the site. To adequately cover the risk of flooding, the original design of the cofferdam on the upstream side has been modified from rock-fill to concrete cofferdam and the height of the cofferdam has also been increased from 6.5 m to 12.5 m. Despite this, it was overtopped six times in different seasons.

Maintaining just-in-time inventory was a huge challenge as even for smaller items the nearest suppliers in Guwahati and Siliguri were around 340 km and 730 km away respectively. Few special materials had to be procured even from as far as Mumbai and Goa which required even longer lead time. Rigorous planning and advance material management systems along with round the clock supervision made it possible to keep the required inventories and work was never interrupted for want of material.

Poor geology prompted to introduce additional feature of the cut-off wall was introduced. The bedrock condition of the dam foundation was very poor. Hence, additional reinforcement has been used to strengthen the foundation that could support the weight of the entire dam.

More than technical challenges, managing and maintaining relations with the populace of the project vicinity for uninterrupted working was a bigger task at Pare HEP. The project management successfully managed it with the support of the ‘Village Elders’ and continuously motivating the team to overcome such situations passionately.

Overcoming all these challenges, HCC has successfully completed the project in May 2018.