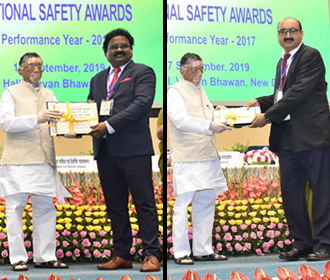 September 17, 2019: HCC’s RAPP Unit – 7 & 8 project in Rajasthan and Sawalkote HEP in J & K has won the National Safety Award for the performance year 2017. The awards are organised by the Directorate General Factory Advice Service and Labour Institutes, Mumbai, under the Ministry of Labour and Employment, Government of India.

The award presentation was held on September 17, 2019, at Vigyan Bhawan Delhi. Mr. Dayanand Samuel, Group Project Manager and Mr. Ram Ray, Project Manager received the awards for RAPP 7 & 8 and Sawalkote HEP respectively from Shri. Santosh Kumar Gangwar, Hon. Minister for Labour and Employment. RAPP 7 & 8 was declared the winner under Scheme II i.e Accident-Free Year. Under this Scheme, there is one winner and one runner-up in each of the 15 groups of industries as given in their schedule which has worked the largest number of manhours, without any fatal/non-fatal accident/total permanent disability during the performance year.

Sawalkote HEP was awarded the runner up trophy under Scheme IX for Lowest Average Frequency Rate. Under this scheme, there is one Winner and one Runner-up in each of the 11 Groups of industries as given in their schedule who has achieved the lowest average weighted accident frequency rate over a period of three preceding consecutive years ending with the performance year.

The Government of India instituted National Safety Awards in the year 1965 to give recognition to good safety practices and to stimulate and maintain the interest of both the management and the workers in accident prevention and safety promotion programmes.