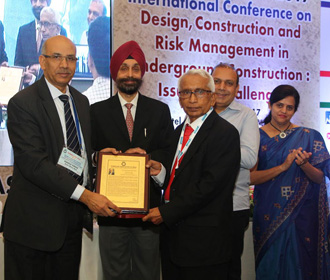 Mr. S D Jeur, Executive Vice President was bestowed with the Life Time Achievement Award by Tunnelling Association of India (Affiliated to International Tunnelling and Underground Space Association) in an award ceremony held in Delhi on February 09, 2017. Mr. Jeur was felicitated for his dedicated service for over five and half decades across all the sectors of construction in HCC and his contribution in making HCC a well-recognised brand in hydro power and underground construction sector in India and Bhutan.

Mr. Jeur’s enormous experience, dedication and patience have fetched many rewards and laurels both for him and the organisation.  For seven consecutive years (2000 to 2006), he has bagged “Best Performance for the year’ award by the HCC Chairman & Managing Director, Mr. Ajit Gulabchand.  He has also been awarded appreciation by “North East Power Company” for his 50 years of committed service to the Construction Industry.  Recently, he was felicitated for his immense contribution in the field of development of hydro power and underground space by “Walchand College of Engineering”, Sangli in the grand Alumni Meet.