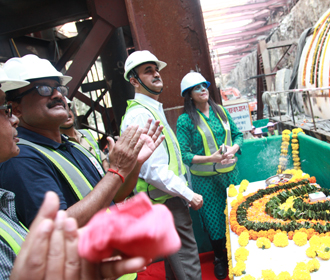 February 21, 2018: HCC successfully launched its second tunnel boring machine (TBM) at Chhatrapati Shivaji Maharaj Terminus (CSMT) site of Mumbai Metro Line 3 package UGC-2 project on February 21, 2018. Manufactured by Terratec, it is a single shield dual-mode hard rock TBM, equipped to operate in both, open or closed mode in the predominantly fresh and slightly to moderately weathered Basalt and Breccia as earlier anticipated in the Mumbai Metro project. Mumbai Metro Rail Corporation Ltd has named these TBMs as Vaitarna I and Vaitarna II. After arriving at Mumbai Port on December 30, 2017 from China, the Vaitarna II was shifted to the CSMT site on January 06, 2018. After assembling at the site, the initial drive for the Vaitarna II was completed on April 02, 2018 and the main drive was started from May 02, 2018. Terratec will provide support to the TBM team for 6 months or initial 150 m drilling. It is expected to achieve an average drilling rate of around 13 m per day over the course of its 3.827 km drive from Chhatrapati Shivaji Terminus to Mumbai Central via the station boxes at Kalbadevi, Girgaon and Grant Road. Vaitarna I was launched in December 2017 and has already completed 333 m of the tunnel.