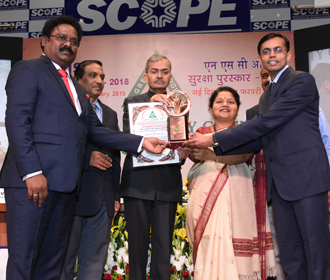 In another instance, the project was bestowed with three awards by NPCIL during the 48th National Safety Day function held on March 04, 2019 at its Safety Training Hall. The project was declared winner in group C of the Project Safety Award. Mr. Dayananda Samuel, Group Project Manager received the award from the Project Director of NPCIL for RAPP 7 & 8.

For the Project Housekeeping Award 2018, HCC’s Control Building was declared Runner-up in Category-A and HCC’s Batching Plant, Crushing Plant, Sand Washing Plant & CTL were declared Runners—up in Category-B. The award was declared after an extensive field survey was carried out, detailed assessment by the panels of judges and the final approval from the Project Director. In the individual category, 7 HCC employees were awarded the Near Miss Accident Award for timely reporting the near misses and taking corrective actions to prevent recurrence of a similar incident at the site.