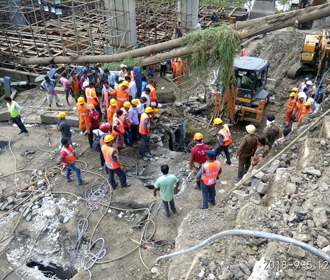 September 04, 2019: A portion of the busy Majerhat Bridge, at Alipore in Kolkata on National Highway 117, collapsed on September 04, 2018. The 40+ years old rail over bridge runs over the Sealdah railway line near the Majerhat Railway station and serves as the main artery connecting the City Centre to Behala and other southern suburbs of Kolkata. Three people lost their lives and more than 25 people were injured in the mishap. Several vehicles commuting on the road were also trapped under the debris.

HCC team engaged in the construction of Kolkata’s longest flyover (Ma Flyover) were immediately summoned by the Kolkata Municipal Development Authority (KMDA) and the National Disaster Response Force (NDRF), to assist with the rescue operation. Without any delay a team of 8 officers and 17 workers including Electrical Engineer, Mechanical Engineer, Safety Officers, Khalasi’s, Welder, Flagmen, Crane Operator and Auto Electrician were rushed to the site. The project team also deployed a tyre mounted crane, an earth mover, a mini truck, a camper and cutting sets for the rescue operation.

Due to the Metro Rail work being carried out, near the mishap area, it was surrounded by under construction buildings, scaffolding and pillars, making the area too narrow for equipment to move freely. In spite of the challenging conditions, HCC team worked relentlessly for three days alongside the KMDA and NDRF officials and were successful in clearing the debris to the extent possible.