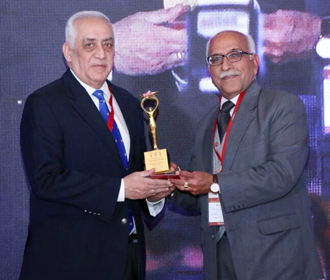 January 23, 2019: HCC has won the "Achievement in Tunnelling” award during the Rail Analysis Innovation & Excellence Summit on January 23, 2019, in Le Meridien Hotel New Delhi. Lt Gen Anil Malik (Retd.) received the award on behalf of HCC. HCC received this award for its achievement in tunnelling solutions to Railways utilized in rail and metro sector.

HCC has been associated with construction of railway tunnels since 1926. The company built India’s first railway tunnel at Bhorghat in 1926. HCC also has the privilege of having built India’s first and second Metro Rail Projects at Kolkata & Delhi respectively. HCC’s scope of work in these projects involved the construction of underground tunnels for the mass transit system.

HCC has recently completed the construction of India’s longest railway tunnel at Pir Panjal, J&K as a part of the prestigious J&K Railway Project. We are at present building a part of the underground tunnel for line 3 of Mumbai Metro Rail Project and a 10.2 km long T48 tunnel between Dharam and Qazigund, for J&K railway Project.

With an aim to bring industry leaders together to address the opportunities and challenges Rail Analysis India had organised its first "Rail Analysis India Awards 2019” in New Delhi. The summit recognized and honored the companies demonstrating innovative solutions, excellence and expertise in the rail and metro sector.