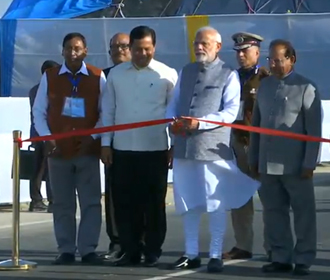 December 25, 2018: The Prime Minister, Shri Narendra Modi today dedicated the Bogibeel rail-cum-road bridge to the nation. Built on river Brahmaputra in Dibrugarh district of Assam, it is the first fully welded steel bridge and the longest rail-cum-road bridge in India. HCC has constructed the superstructure of the 4.9 km long bridge.

Mr. Arjun Dhawan, Director & Group Chief Executive Officer, said, “It is a moment of immense pride for us to construct such an engineering masterpiece. This has many firsts in India - is the first fully welded Warren truss girder type steel bridge and incremental launching has been used for superstructure erection for the first time in India. This is also the world’s longest incrementally launched steel bridge. HCC team through its sheer dedication and meticulous planning has completed this project under challenging circumstances.”

With the width ranging from 1.2 km to 18 km, Brahmaputra river has been bridged four times in the past. HCC holds a distinction of building two of these bridges and has now constructed the 5th bridge at Bogibeel.