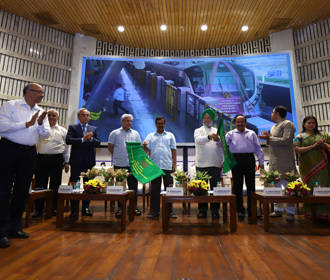 March 14, 2018: Delhi Metro’s Pink Corridor from the Majlis Park station to Durgabal Deshmukh South Campus station, which consists of CC 30 package built by HCC, has been formally inaugurated for passenger services on March 14, 2018 by Mr. Hardeep Singh Puri, the Union Minister of State (Independent Incharge) for Housing and Urban Affairs and Mr. Arvind Kejriwal, the Chief Minister of Delhi. During the inauguration, Dr. Harsh Vardhan, the Union Minister of Science and Technology, Earth Sciences, Environment, Forests and Climate Change, and other senior dignitaries were also present. The 21.56 km long corridor is the longest stretch opened as part of Delhi Metro’s Phase III so far.  It consists of 12 stations and will connect the Delhi University’s South Campus for the first time by Metro. Out of 12 stations, HCC has constructed two stations - Shalimar Bagh (underground) and Netaji Subhash Place (semi underground). The DMRC has praised HCC’s work through an appreciation letter for completing the critical works within a short period of time with great efficiency, safety, and quality. The dedication, professionalism of the team in undertaking the critical works as well as the determination of the project leadership were also appreciated.