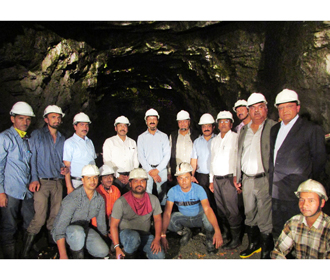 The 111 MW Sawra-Kuddu hydro power project achieved a major breakthrough as it linked the two ends of 11.365 km long underground tunnel, from the barrage to the power house on September 04, 2017.  The button for the last blast of the underground tunnel was pressed by Mr. Devesh Kumar, Managing Director, Himachal Pradesh Power Corporation Ltd (HPPCL).

Sawra-Kuddu hydro power project is a run-of-river project on Pabbar river in Jubbal tehsil of Shimla district in Himachal Pradesh. The diversion barrage is located near Hatkoti and underground powerhouse is located on the left bank of Pabbar river near Snail village.

The work of the headrace tunnel was initially awarded to Aban Coastal joint venture in June 2007. However, the contract was terminated in January 2014 and the balance works were subsequently awarded to HCC in November 2014.

The main bottleneck in the construction of headrace tunnel was the balance excavation, which was around 1,643 meters, mainly because of adverse geological rock conditions encountered during the course of excavation. The tunnel had to be driven through rock strata with the high ingress of water along with flowing rock conditions at various locations.

The conditions were challenging and it demanded extra diligence and caution during excavation works as the geology was prone to frequent loose falls. Unstable and loose rock strata requisitioned additional measures such as backfilling, providing bulkhead, sand-fill bags and ribs installation before proceeding ahead.

HCC Team successfully achieved the day-lighting of the tunnel on September 04, 2017. On commissioning, the project will generate 386 million units per annum in a 90% dependable year.