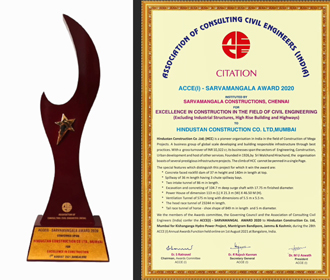 August 01, 2021: HCC's Kishanganga Hydro Power Project in Jammu & Kashmir has been awarded the ACCE (I) Sarvamangala Award – 2020 under "Excellence in Construction". The Award was received by Mr AI Benny, Project Director – Hydro & Water, during the 28th Annual award function held on the virtual platform on August 01, 2021.

The project's construction began in January 2009 on three fronts – Head Race Tunnel (HRT), Power House and Ventilation Tunnel. The Kishanganga project envisages the diversion of water of the Kishanganga river to an underground powerhouse through a 23 km HRT, located 1.5 Km deep into the mountain. The plant will generate 1,713 million units of power per annum. Apart from the many states which would be the project's energy beneficiaries, 12 per cent of the power generated from the project shall be provided to the State of Jammu & Kashmir.

HCC team created a world record of the first successful Tunnel Boring Machine (TBM) operation in the Himalayan region and accomplished a national record by achieving the "highest tunnel progress in a month" of 816 m in November 2012. While doing so, the team has successfully overcome several geological and engineering challenges.

Prime Minister Narendra Modi inaugurated the strategically important Kishanganga Hydro Power project built by HCC on May 19, 2018. HCC has time and again taken up complex infrastructure projects and created benchmarks by contributing to India's infrastructure journey. The Prime Minister terming the project as "an engineering marvel" stands testimony to this.