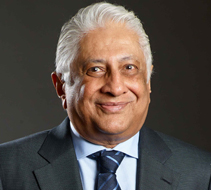 Ajit Gulabchand, Chairman and Managing Director of Hindustan Construction Company Ltd., has spearheaded the transformation of the company from a construction major into a diversified infrastructure group of global scale, developing and building responsible infrastructure through next practices. With a group turnover of over Rs. 9,437 crore (US $ 1.24 billion), HCC’s businesses span across engineering & construction and infrastructure.

Under Mr. Gulabchand’s leadership, HCC continues the illustrious tradition set by his predecessors. The group has a knowledge asset of more than 2,200 officers, including around 1,500 engineers. It employs around 20,000 workers at its project sites across India. The result is a business that plays a leading role in meeting the huge infrastructure needs of India, leveraging best-in-class equipment and technology, knowledge-driven processes and innovation-led next practices.

Disaster Relief forms a significant area of focus at HCC. Mr. Gulabchand has been the Chair of Disaster Resource Partnership Steering Board, in 2015 and 2016, formed as a partnership between the World Economic Forum’s Infrastructure and Urban Development Community, Humanitarian agencies and Civil Society. He is also the founder member and Chairman of Disaster Resource Network India, wherein he has steered emergency response teams and rehabilitation to a number of locations struck by natural disasters. He is also a member of the Private Sector Alliance for Disaster Resilient Societies (ARISE), United Nations International Strategy for Disaster Risk Reduction (UNISDR).

Recognizing the emerging water crisis and with a view to make water sustainability a corporate priority, Mr. Gulabchand became the first Asian signatory to endorse the United Nations’ CEO Water Mandate. HCC has demonstrated its water consciousness and commitment to water conservation by implementing a series of rigorous and improved water management practices at its project sites.

Alongside his responsibilities at HCC, Mr. Gulabchand has been a vocal advocate of sustainable development and is regarded as a spokesperson for India’s infrastructure sector in global forums. A regular participant at the World Economic Forum (WEF) for over two decades, Mr. Gulabchand was the first Asian to Chair the Governor’s Steering Board of the Engineering & Construction Community at the WEF in Davos, 2011. He also served as a Co-Chair at the WEF’s India Economic Summit in 2010. He is a signatory member of Caring for Climate, United Nation’s action platform for business and a signatory member of WEF’s CEO Climate Leaders. He has also been a frequent invitee to ministerial business delegations from the Government of India to various countries aimed at attracting foreign investments into the Indian infrastructure sector.

Mr. Gulabchand is a strong supporter and patron for several technical institutions in India. He is the Chairman of the Board of Trustees and Board of Governors of the National Institute of Construction Management and Research (NICMAR) and Chairman of the Administrative Council of the Walchand College of Engineering.