HCC erects first of Its kind dome at RAPP Unit 7 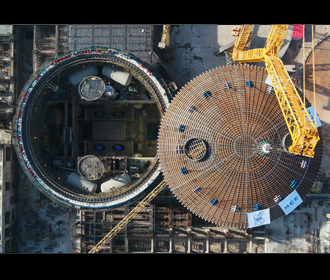 February 25, 2018: HCC has successfully completed a major milestone at the Rajasthan Atomic Power Project (RAPP) in Rawatbhata, Rajasthan on February 25, 2018, by lifting and erecting the massive dome of the reactor building of Unit 7 with a remarkable precision. HCC has undertaken the construction of Units 7 & 8 (2x700 MW) of the Pressurized Heavy Water Reactors for the main plant of the RAPP.

The single piece torispherical dish-shaped dome weighs 346 metric tons. It is 49 m in diameter and about 8 meters tall at the center. The dome was assembled using 53 panels joined seamlessly by welding. The total length of the weld carried out in the fabrication and assembly of the dome was around 5 km.

The entire process took 11 months and was completed in three stages. First, panels were fabricated in the fabrication yard followed by the assembly of panels near the reactor building and finally welding them together to form the huge dome. The fabrication of panels was so precise that the assembling of panels didn’t require any force fitting. This was appreciated by the senior officials including designers of NPCIL and Atomic Energy Regulatory Board (AERB).

A special 1350 tons LIEBHERR LR 11350 Crawler Crane was used to erect the dome. A no-load mock-up of the crane was carried out in the initial stage to finalize the crane position considering the center of the dome at assembly and center of the reactor and to check the vertical clearance required for the erection of dome. On February 23, 2018, the dome was lifted twice and held in position for 30 minutes and 120 minutes separately to release the stress and checked for any distortion at predefined control points. In order to avoid any last minute trouble the sequence of lifting, marching and swinging were meticulously worked out well in advance.

One of the two tower cranes were lowered to below ring beam level to ensure adequate clearance from the bottom of the dome as well as from the mast and boom of the crane during the swinging and lowering operation. The time of erection was decided after studying the hourly wind speed variations and data available from the Project Meteorological laboratory.

Actual lifting was started at 7:46 am and the placing in position including arresting of support points, was completed by 11.10 am - in just three and half hours. After erecting, the critical controlling points of reactor alignment (CB/CR) and dome crown elevation were checked and found that same were matched precisely with +/- 2 mm accuracy.

Kudos to the RAPP project team for completing the herculean task in the first attempt.