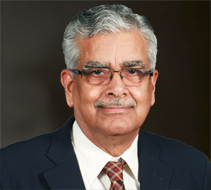 Mr. N.R. Acharyulu, an Independent Director of HCC Ltd., has a distinguished career having more than forty-seven years of enriched experience and has held various leadership positions during his long stint. He had a remarkable rise during his career, due to his business acumen, project management and leadership skills.

A Mechanical Engineer from Andhra University, Mr. Acharyulu joined HCC in 1970 as Junior Engineer at Idukki Hydroelectric Power project in Kerala. Over the years, he worked on various projects covering all segments viz., Hydro, Transport, Water, Marine & Nuclear/Industrial structures, During this tenure, he worked on various state-of-art mining and tunnelling equipment including tunnel boring machines.

During his career with HCC, he was entrusted with the responsibilities of heading the Plant and Equipment department since 1991. Thereafter he headed the Construction Engineering and Methodology Group (CEMG) in 2001 for some time before he was made the Project Controller of the Water Supply and Irrigation Projects in 2004. He was then made the Head of Water Vertical in 2007 and later given the independent responsibility of Claims Task force in 2011.

Mr. Acharyulu became the Chief Operating Officer of HCC in mid of 2012 and then was given the charge to head the Sales and Tendering Division, since 2014 with the sole aim to build the order book.

Mr. Acharyulu is also on the Board of Directors of Steiner India Ltd.